Look at Hemp and its Dietary Hemp Seed Protein

Look at Hemp and its Dietary Hemp Seed Protein

Proteins are the building blocks of the body and work as structural components, enzymes that function as catalysts for body processes and as nutrients our bodies use for energy. Amino acids, the result of protein digestion, are absorbed by the body and reconfigured into new proteins that can be effectively used by the body.

Protein can be derived from either an animal or a vegetable source. Animal sources are considered most bioavailable for humans as they provide all the essential amino acids needed as well as high bioavailability. Most plant proteins are incomplete in providing all nine essential amino acids and bioavailability is lower and dependent on preparation. The exception to this quandary is the protein derived from hemp – a multi-purpose crop with high sustainability.

Hemp seed protein is an industrial by-product of hempseed and is used primarily as a functional food supplement. With its balanced macronutrient profile and a full complement of twenty amino acids, hemp is considered a nutritionally favorable plant protein source.1It contains the globular proteins edestin(salt-soluble)and albumin(water-soluble)in an approximate ratio of 3:1,respectively.2 These proteins are critical for robust immune function because of their enzymatic activity in blood plasma and the formation of antibodies. Edestin is highest in hemp, relative to other plants, and is considered the most easily digestible protein averaging 92% – even when compared to soy protein isolate.3,4 A high percentage of arginine and glutamic acids, as well as being abundant in the remaining essential amino acids, highlights edestin’s unique value.5

Production of hemp originated in Central Asia thousands of years ago. Hemp has a long history of being used as a food grain, and as a source of fiber, such as clothing, rope, and netting.

In 1606, French Botanist Louis Hebert planted the first hemp crop in North America in Port Royal, Acadia (present-day Nova Scotia). As early as 1801, the Lieutenant Governor of the province of Upper Canada, on behalf of the King of England, distributed hemp seed free to Canadian farmers.

Fibre hemp cultivation continued in many regions to the 20th century. Through many Old World cultures, hemp seed also has a long tradition of in Canada: immigrants from Eastern Europe brought hemp seeds with them when they settled the Prairies. These they planted and used hemp seeds for fresh oil, baking, and traditional dishes as well as for medicinal and other dietary reasons.

In Canada and in the US, hemp was outlawed 80 years ago, because it was confused with other kinds of Cannabis. Hemp is often called industrial hemp to distinguish it from other varieties of the plant. In Canada, all commercial hemp strains are grown under science-based regulations to maintain and ensure genetic identity.

After a half century’s absence from Canada’s fields and factories, hemp cultivation was again allowed in 1998, reawakening this country’s relationship to this interesting, fascinating, flexible plant.

All industrial hemp grown in Canada is GMO free.

Hemp: A Non-Drug Version of Cannabis

Hemp, or Cannabis sativa L., (Cannabaceae), is a non-drug version of Cannabis and should not be confused with its distant cousin known as marijuana, or Cannabis indica. Hemp is cultivated for its nutritional benefits as well as a wide and growing variety of other purposes that don’t involve intoxication (< 0.2% THC).6,7 Marijuana, however, is bred for its euphoric, psychoactive properties from the potent resinous glands which contain high levels of Δ-9-tetrahydrocannabinol (THC).

There are also distinctive traits between these two Cannabis species. Cannabis sativa L. grows taller with brighter, green leaves which are narrower and branches that are further apart. It can be associated with an uplifting and cerebral effect. It is best consumed during the day as it elevates mood and stimulates creativity. Think energizing!

Cannabis indica, on the other hand, is a dense plant that grows short with broader, dark green leaves and close to the ground. It has more of a body effect and as such is best consumed in the evening or late afternoon. Think couch-lock! 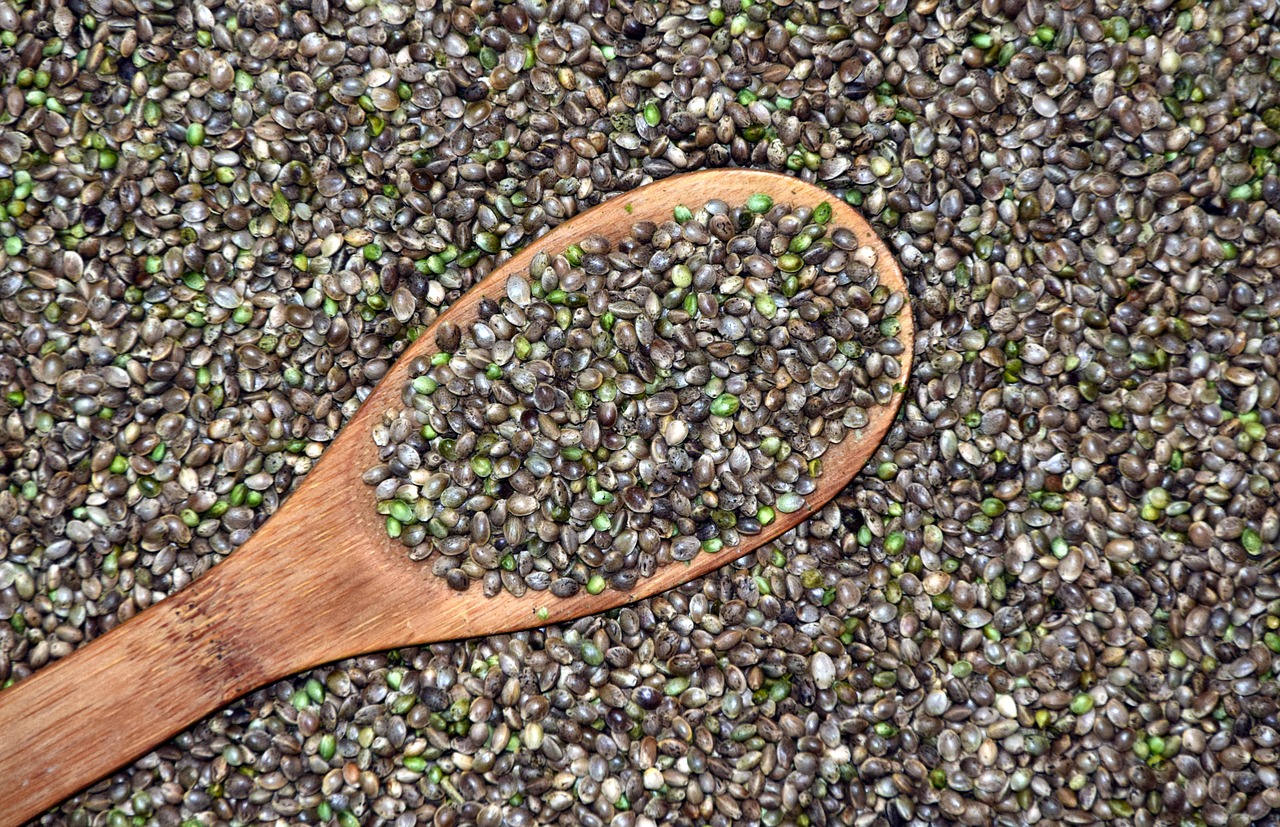 Hemp also contains a significant amount of dietary fiber, chlorophyll, vitamins, and minerals.  The minerals contained in hemp are potassium, magnesium, calcium, zinc, iron, and folate. It has got antioxidants with the additional benefits of no saturated fat, cholesterol, sodium or sugar. Naturally low in complex carbohydrates, hemp has not been typically associated with bloating and flatulence – one of the drawbacks of consuming large amounts of other plant protein sources.

Hemp Seed  as a Source of Essential Fatty Acids

Hemp seed protein extracts contain the ideal 3:1 ratio of linoleic acid (LA; Ω-6) and alpha-linolenic acid (ALA; Ω-3) polyunsaturated fatty acids (PUFA’s)which are necessary for maintaining overall health.8,9 This is especially critical since Western European and North American food supplies have reported Ω-6:Ω-3 ratios of 16:1.9These fatty acids are termed “essential” (EFA) since the body cannot produce them on its own and must be obtained from the diet. ALA is converted by the body into the all-important eicosapentaenoic acid (EPA) and docosahexaenoic acid (DHA). However, a biological metabolite of these EFA’s, stearidonic acid (SDA), converts more efficiently to EPA and may have a greater health benefit over ALA.10 Recent research has also shown that SDA may be beneficial as a dietary treatment for obesity.11

Other Health Benefits to Note

Hemp is also rich in another biological metabolite, gamma-linolenic acid (GLA), which is considered a healthy, anti-inflammatory Ω-6fatty acid.12Historically, GLA has shown to have beneficial effects on numerous conditions including immune response and skin disorders.13-15

In a recent animal study, a proprietary micro-encapsulated formula of hempseed oil was clinically shown to enrich Ω-3 PUFA’s and GLAin eggs and meat.16PUFA-enhanced diets reduce the deleterious effects of platelet aggregation – and not necessarily because cholesterol is lowered but more to do with elevated plasma GLA.17 Further benefits of PUFA’s from hemp seed showed a significantly better response to post-ischemic reperfusion than from other sources indicating superior cardio-protective potential.18

Analysis of a hempseed protein isolate, prepared from defatted hempseed meals, led to the identification of four potentially bioactive peptides with IC50 values confirming that hempseed may be a valuable source of hypotensive peptides.19

Including Hemp in the Diet

In a recent study when two plant foods, hemp, and bitter vegetable, were consumed at will by aged mice results showed an increase in life span and cognitive function improved. Further results indicated a protective effect against metabolic syndrome, chronic inflammation, fatty liver, and gut dysbiosis when compared to a Western diet. While demonstrating that such a diet can indeed promote health and longevity, it also represents the value of sustainable sources of healthy foods that are able to keep chronic illness at bay and minimize the agricultural impact on the environment.20