Magnesium Stearate has been used in the manufacture of capsules and tablets for the past 70 years without any scientifically proven claims against its use. It is an inactive compound that acts as a lubricant while effectively dispersing raw ingredients and preventing the gumming-up of machinery. The goal of this article is to continue to dispel the myths that magnesium stearate is responsible for adverse physiological events. In addition, this information is to provide research proving that it may actually benefit human health.

Magnesium Stearate (MS) is a stable, neutral ingredient used in the manufacture of dietary supplements as well as pharmaceutical drugs. It is created by binding a magnesium molecule with two Stearic Acid(SA) molecules to create a powder-like substance that is highly effective as a lubricant, or flow agent. A minuscule amount, typically ranging between 0.25% – 5% of total capsule or tablet weight, is all that is required to ensure that ingredients added to capsules and tablets do not stick to each other as well as the machinery on which they are produced. More importantly, it allows for consistent dosing of ingredients within the preferred delivery mechanism and ensures that the specified levels of these ingredients coincide with label claims.

How Much Magnesium Stearate Is Too Much?

As mentioned, Magnesium Stearate is a neutral ingredient with Sondergaard et al(1980) indicating that MS is non-toxic even at levels of 2,500 mg/kg of body weight per day, an estimate of 5% in the diet.1That translates into a little over 1 gram of MS per pound of body weight, per day. A person weighing 175 pounds could then consume 198 grams, or just over 7 ounces of MS without any adverse effect to major organs, bone marrow, and T and B immune cells. There is approval in the use of  MS and Generally Recognized As Safe (GRAS) by the U.S. Food and Drug Administration.2

Since MS and SA are intrinsically linked, but not necessarily synonymous with each other due to MS being twice the molecular weight, the following attempts to explain SA:

SA is a commonly consumed dietary fat and ubiquitous in the food industry as an additive. We get SA is in eggs, chicken, cheese, salmon, coconut oil, and other monounsaturated fats. Examples of percentages of SA compared to total fat in beef is 20%; in butter, 11%; in flaxseed oil, 7%. The amount of SA in a hamburger patty is 2.8 grams; in a chocolate bar, 4.4 grams. Statistics show that an American adult consumes 7 grams, on average, of SA daily.3

For comparison’s sake, let’s examine the total amount of MS in an entire bottle of multivitamins containing 60 capsules. Assuming that each capsule contains 500 mg, this would equate to 30,000 mg, or 30 grams, of total weight per bottle. Say for example, if  we take the upper end of 5% of MS, then the total amount of MS in the entire bottle is just 1.5 grams. That’s still considerably less than the 7 grams of SA an average adult consumes daily or the 4.4 grams of SA in a chocolate bar. 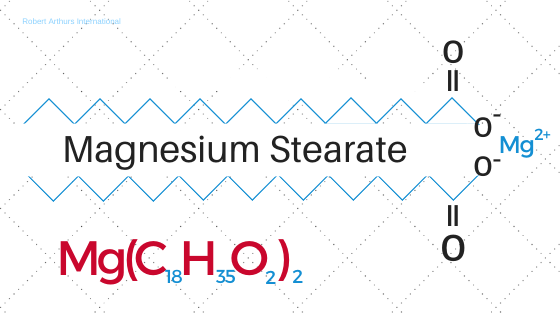 A recent revival of a 1990 study indicates that SA – not MS – negatively affects T-cell immune response by collapsing membrane integrity in mice, in vitro. The interesting point that is clearly overlooked in this study is that the authors, Tebbey et al, clearly state that mice lack the enzyme delta-9 desaturase in their T-cells, which is likely the reason they cannot convert SA, resulting in the excess saturation of the T-cell membrane.

Another important feature of this study is that SA was the only fatty acid used in this petri dish experiment, which is not comparable to what actually happens in vivo as there are other factors that determine how cell membranes respond to fatty acids within the human body.4

Additional research by Buttke et al (1984) suggests that SA has a cytotoxic effect on T-cells.5 However, a 2017 study by Hobbs et al states that there is no published data available to indicate that MS has genotoxic potential.6Additional information from the PAN Pesticides Database also discredits any claims that MS, or SA, induces toxicity or carcinogenesis while further supporting safety data.7

As a side note, the 2017 study has been used in safety assessments of MS jointly by the United Nations Food and Agricultural Organization and the World Health Organization, as well as the Japanese government.

More Findings on MS and SA

These animal studies that appear to dissuade the use of SA or MS, have little to no bearing on human physiology since humans have the delta-9 desaturase enzyme and can convert SA to oleic acid; so says Anel et al(1990).8 This conversion prevents the saturation of SA in human T-cell membranes resulting in neither immune suppression nor genetic toxicity.

Further concern that MS or SA perpetuates the formation of biofilm in the gastrointestinal tract may well be a non-starter considering SA plays a role in actually preventing the biofilm P. mirabilis by attacking the virus that causes the condition, as pointed out by Liaw et al (2004), as well as having a negative effect on the formation of the biofilm E. coli K-12, as described by Soni et al (2008).9,10

Other Concerns to Note:

Other concerns have been promulgated that MS affects absorption and bioavailability by creating a film around nutrients. This point is purely based on an unpublished experiment with no studies, human or otherwise, to support it. When considering that the amount of MS averages 2.5% of total capsule weight, a coating effect on active ingredients in simply incomprehensible since this tiny compound is outweighed by these same ingredients by approximately 40 times.

Contrary to the point of affecting absorption, the SA in MS actually has an excellent absorption rate and conversion to oleic acid, as expressed in three different peer-reviewed studies.11-13Interestingly, MS actually optimizes the delivery of active ingredients as shown by Li et al (2001),14without adversely affecting dissolution or bioavailability, as Eddington et al elaborates (1998).15

Potential Benefits of Magnesium Stearate to Cardiovascular Health and Obesity

Besides the benefit of additional magnesium as the MS salt is broken down by the digestive system after ingestion, there is also published research in 2005 showing that SA has a neutral effect on LDL cholesterol in one study, and a lowering effect on LDL in another.16,17

Also, Hunter et al (2010) published that SA improved the total cholesterol to HDL ratio by lowering LDL and having a neutral effect on HDL.18

Finally, research on obesity, in the Shanghai Diabetes Study (2016), shows that increased oleic acid/SA ratios compared to other free-fatty acids may benefit those who are at-risk for obesity.19

In a nutshell, there is no evidence to find in the scientific literature that effectively support claims that inert compounds MS or SA cause immune suppression, cytotoxicity, biofilm formation, and limited nutrient absorption in humans. Questioning the validity and accuracy of future claims made by those wishing to propagate misinformation should be encouraged, not only for the benefit of all reputable supplement manufacturers and healthcare professionals but ultimately for the health and betterment of their patients.