Osteoarthritis (OA), which affects millions of people worldwide, is a common form of arthritis that results in acute or chronic pain and is often debilitating. The joint cartilage is the point of origin for this condition which begins to degenerate the cartilage matrix and the subchondral bone resulting in pain and inflammation in the surrounding joint. OA primarily affects the weight-bearing joints such as knees and hips but also has an affinity for the hands.

Typical conventional treatment for OA defers to various drugs such as analgesics, NSAIDs, and corticosteroids. With these interventions come adverse side effects and genuine potential for morbidity and even mortality. Alternatively, the nutritional treatment of Osteoarthritis can provide significant relief, and without the side effects. This nutritional intervention includes select herbs such as white willow, ginger, and turmeric.

The term arthritis, which has been associated with hundreds of rheumatic diseases affecting an estimated 15% of all Canadians, is the leading cause of disability and its impact is projected to exceed 23% of all Canadians by the year 2021, especially with the aging population.1 Clinical symptoms of OA have been assessed in over 10% of British Columbians while septuagenarians made up most of that group with an average of 36% having OA.

2 When compared to the percentage of Canadians with arthritis, OA is the most prevalent type. This slow degenerative condition is identified by changes in subchondral bone shape as well as the ongoing breakdown of articular cartilage.3

As noted, articular cartilage damage and eventual deterioration is the main reason for the development of OA.4The root causes, which were considered unavoidable due to aging, may indeed be a combination of both physical stress – which includes weight gain as well as impact or strain – and biochemical changes. The loss of cartilage components, as well as proteoglycans, is considered as the early stages of the disease with inflammation occurring around the synovium.

A secondary progression of the condition is loss of cartilage volume, compromising integrity while losing elasticity, and less likely to recover from injury especially due to repetitive use, increased weight or even malalignment. The subchondral bone, over time, becomes exposed due to micro-fractures and forms bony outgrowths, bone spurs, or osteophytes along the joint margins.4Thisfunctional deterioration of the joint is accompanied by pain, stiffness, swelling, and deformity. 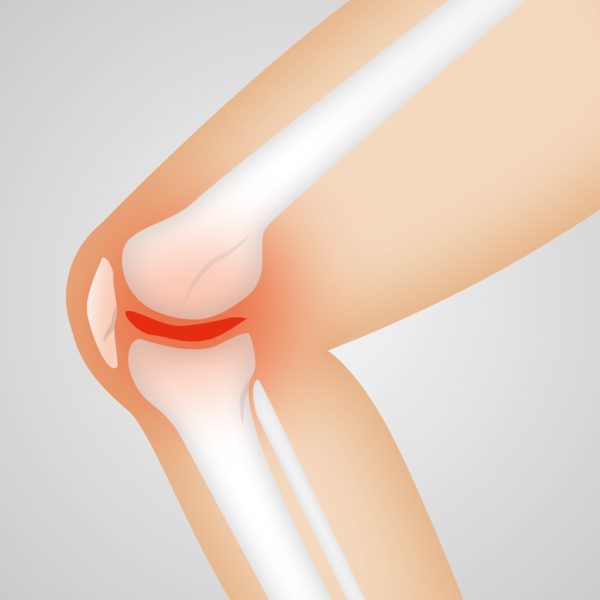 Typical treatment for OA is with NSAIDs, and while these drugs are effective for pain and inflammation, they come with a number of adverse side effects including gastrointestinal issues, damage to the kidneys, and cardiovascular events.6As expected with most pharmacotherapeutic agents, prolonged use of NSAIDs does not appear to slow the progression of OA.4,5 Other drug treatments include analgesics and corticosteroids – contributing to another array of side effects. Of course, the drug model in treating OA – or any condition for that matter – is symptomatic relief without consideration for slowing the progression of, nor having interest in, the underlying cause of the disease.

Nutritional Treatment of Osteoarthritis:
The First-Line Approach for OA

Symptomatic relief, while addressing the underlying cause, cannot be overstated. Considering a review of lifestyle choices particularly when it comes to nutrition  as the first-line approach towards effective treatment of Osteoarthritis is crucial to do so. There are a number of natural substances that have shown significant value in preventing and treating OA. These select herbs, with their unique characteristics, may indeed prove to be the nutritional treatment for osteoarthritis. Such nutritional support required by individuals living with this condition.

Conversely, the range of activity of phytochemicals found in nature has demonstrated significant positive effects as pain and inflammation have been attenuated through a number of mechanisms by possibly blocking lipoxygenase and cyclooxygenase pathways – similar to properties in aspirin.

Willow bark extract has been considered for many millennia as the “go-to” for reducing inflammation, relieving pain, and addressing fever. The anti-inflammatory effect may be attributed to the down regulation of the pro-inflammatory cytokine TNF-α (tumor necrosis factor-α), leading to the deactivation of NF-kβ (nuclear factor-kappa β) – a prototypical pro-inflammatory signaling pathway.

How Effective is White Willow?

The active ingredient in white willow called salicin, which is a chemical similar to aspirin (acetylsalicylic acid) makes this herb effective for OA. More than that, white willow contains anti-inflammatory plant compounds called flavonoids. This combination of flavonoids and salicin is thought to be the reason for the anti-inflammatory and pain-relieving effects of the herb.

Ginger (Zingiber officinale) and turmeric (Curcuma longa), two very popular herbs in Ayurveda and traditional Chinese medicine, have long been used for a variety of both acute and chronic inflammatory conditions such as arthritis. A number of in vitro and animal studies suggest that either combined or isolated, these herbs demonstrated a beneficial effect on specific biomarkers of arthritis resulting in a reduction of pro-inflammatory cytokines, as well as providing a chondroprotective effect.9-17These herbs also exhibited an ancillary benefit of increased superoxide dismutase which inhibits reactive oxygen species generating enzymes.9,15As effective as these herbs are, they are considered safe in a number of human clinical trials.13,18-20

How Effective are Ginger and Turmeric?

The effect of ginger was evaluated on patients with OA, RA, and muscular discomfort. Results showed that more than three-quarters of the arthritic patients reported improvements in pain and swelling, while all patients with muscle discomfort reported relief.17Ginger supplementation ranged from 3 months to 30 months with no reported side effects.

In a 6-week long, double-blind placebo-control, parallel-group clinical trial of 40 patients with mild-to-moderate knee OA, the analgesic properties of curcuminoids, the principal compound found in turmeric, demonstrated significant improvements in the pain and physical function scores.20

A unique aspect of articular cartilage is that chondrocytes in the avascular tissue do not receive a steady supply of nutrients directly from a capillary bed as do other tissues but instead from subchondral bone marrow and synovial fluid.21As a result, the nutrients must be absorbed by the cartilage much like a sponge absorbs fluid. The way that nutrients are delivered is similar to walking or jogging – by alternating compression and decompression.

Excess body weight may possibly increase the potential for developing OA.22 In many cases, this excess weight is visceral adipose tissue (VAT). VAT is more difficult to lose than other fat, (e.g. subcutaneous adipose tissue) since it wraps itself around major organs such as liver, kidneys, and even the gastrointestinal tract. However, studies have shown that it is entirely possible to reduce VAT while maintaining healthy muscle mass.23,24

To sum up, an effective lifestyle modification program that addresses body composition and proper joint motion should be the first-line approach to helping rid the body of VAT since excess weight can have a detrimental effect towards the onset of OA. Physical activity may help preserve muscle mass during dietary interventions.25 Likewise, the nutritional treatment of Osteoarthritis noted herein would supply the nutrition to the cartilage in order to support and maintain the integrity of the cartilage tissue.